A vehicle that makes a left turn is almost always liable for causing a crash with a vehicle coming from the other direction and heading straight.

This type of crash is known as a left turn accident.

In an Injury Case for a Left Turn Crash, Does It Matter Who Gets the Ticket?

Not really.  A police officer will typically give a ticket to the driver who made the left turn.  The citation will usually be for failure to yield the right of way.

However, a ticket cannot be used in a personal injury case in Florida.

That said, it’s generally a good sign for your injury case if the other driver gets a ticket for failing to yield the right of way.  Police officers are usually, but not always, right when assigning fault.

When Does the Driver Who Made a Left Turn Have a Case?

A driver who made a left turn, and crashes into a car that was going straight, may have a case in limited circumstances.

Examples of these limited situations are if one or more of the following is true.  They are if the driver heading straight was:

In addition, the driver who made a left turn may still have case if:

The left hand turn driver may also have a case is if there was construction that made it difficult to see the other car.

Will the Insurer for the Left Turn Driver Usually Accept Liability?

Yes.  As an example, a motorcycle rider who was going straight down a street.  A driver of an 18 wheeler made a left turn and hit the motorcyclist.

The crash diagram is at the top of this article.  The insurance company (now AIG) for the truck quickly paid for the damage to the motorcycle.

When discussing the motorcycle rider’s personal injury claim, the AIG adjuster said that the motorcyclist may have some fault in the crash.  (Many jurors feel little sympathy for motorcyclists.)

However, adjusters often bluff in an attempt to pay as little as possible.  Ultimately, the adjuster basically accepted liability for the injury case.

I settled the motorcyclist’s personal injury case for $445,000. 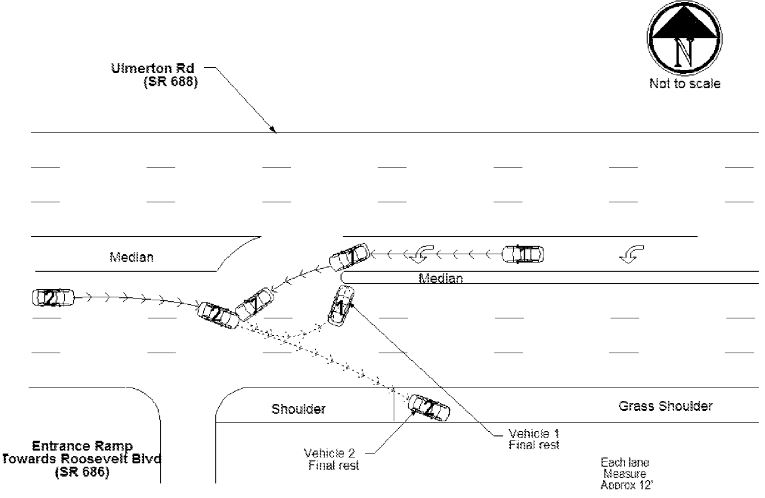 In this case, vehicle 2 was traveling straight.  Vehicle 1 made a left hand turn into vehicle 2’s path of travel.

Allstate Insurance Company insured the driver of vehicle 1.  They quickly paid for the damage to vehicle 2.

Travelers Insurance Company insured the driver of vehicle 2.  They paid $200,000 in underinsured motorist (UIM) insurance coverage to settle the case.

Passenger in Left Turn Accident Gets $150,000 Settlement for Back Surgery

The passenger was hurt, and later had back surgery.  Progressive Insurance Company insured the driver who made the left turn.  They paid the $50,000 BIL limits. Sara was driving her car on State Road 826 (The Palmetto) near NE 17 Avenue in North Miami Beach, Florida.

As you can see from the diagram above, Vehicle 1 made a left hand turn in front of Sara’s (Vehicle 2) path.

Sara struck vehicle 1, causing her SUV to run off the road to the right and hit a business sign.

The airbag broke Sara’s nose.  She also claimed that the crash worsened her pre-existing herniated disc. GEICO insured the car.  They paid $100,000 to settle the motorcyclist’s personal injury claim.

A man was driving his car straight down the street.  A 18 wheeler made left hand turn into the car’s path.

They crashed.  The driver of the car claimed that the crash caused or aggravated his herniated disc.

These are just a few of the many left hand turn accident claims that I’ve settled.  You can see more of them on my car accident settlement page.

Hurt from a Left Turn Accident, or Other Accident in Florida?