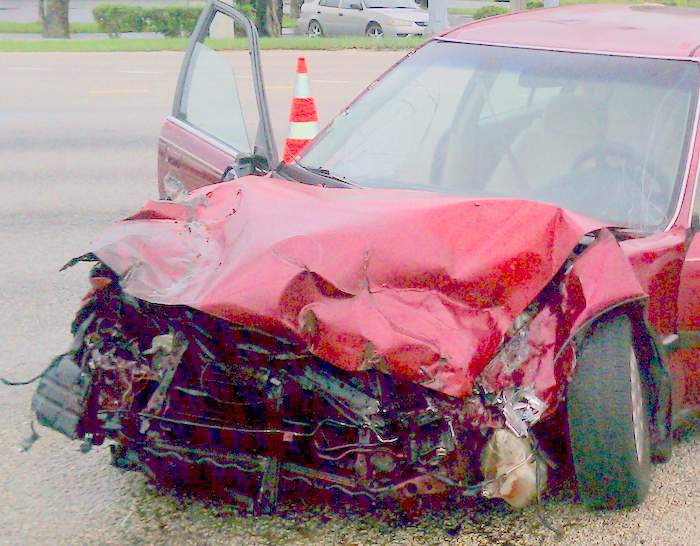 All settlements in this article are before deduction for attorney’s fees and expenses. Most cases result in a lower recovery.  It should not be assumed that your case will have as beneficial a result.

He drove his car into an 18-wheeler tractor-trailer.  The truck cut him off.  The settlement was in January 2012.

The crash happened near Cutler Bay, Goulds and Princeton, which are located in Miami-Dade County, Florida.

The car that my client was driving is in the picture.  I discuss the settlement below:

The 18-wheeler had $750,000 or so of liability insurance with Zurich Insurance Company.

My client had PIP insurance through Windhaven Insurance Company.

A picture of the damage to the truck is below:

The actual diagram from the Florida Traffic Crash Report is below.

I argued that the truck driver was at fault for several reasons:

As you can see from the picture in this article, my client’s car was badly damaged. It is easier to prove that a herniated disc is related to a car accident when you can show the insurance company (or jury) pictures of a badly damaged vehicle.

This is particularly true when you are dealing with someone who is 40 years old or older who is claiming that the herniated disc is related to the crash.

This is because some doctors say that many 40 year olds have a herniated disc and don’t even know it.

Property damage is less important if the injured person who is making a claim is young (let’s say 20 years old or so) because most 20 year olds do not have a herniate disc.

My client’s doctor claimed that the herniated disc in his neck was related to the crash. If I filed a lawsuit, I would have expected Zurich Insurance to hire an orthopedic doctor who may have said:

My client was taken to the hospital by fire rescue. At the hospital, he was told he might have a fractured vertebra and he was transferred to another hospital.

At the second hospital, he was told that he did not have a neck fracture.  He treated with a neurologist and received a few months of physical therapy for his neck.

My client did not want to have surgery on his neck. Baptist Hospital would not reduce my client’s medical bill. This is probably because Baptist was aware that my client received over 1/3 of the total settlement.

Some hospitals are more likely to lower their bill when they know that the client is getting less than 1/3 of the total injury settlement. My client feels well right now.

I believe that this resulted in a larger presuit settlement than if the truck had been insured by State Farm Insurance, GEICO, Progressive, Allstate and many others because they generally make smaller offers when there is plenty of liability insurance.

An injury case is worth a certain amount, but your hopes of reaching a settlement before a lawsuit are higher if you are dealing with an above average insurance company such as Zurich.

Were you injured in a Florida car crash or other type of accident?