You are here: Home / Auto Accident Claims / Driver Gets $20,000 for Soft Tissue Injuries from Car Crash My client was a 35 year old nuclear chemist who was driving his pickup truck in Homestead, Florida.

Another truck ran a stop sign.  They crashed.  I settled the personal injury case for $20,000.

A truck was traveling behind him in the same direction.  The truck struck Mike’s truck from behind causing the crash.

Mike’s truck was propelled east.  It rolled over and hit a fence.

A crash diagram is below. 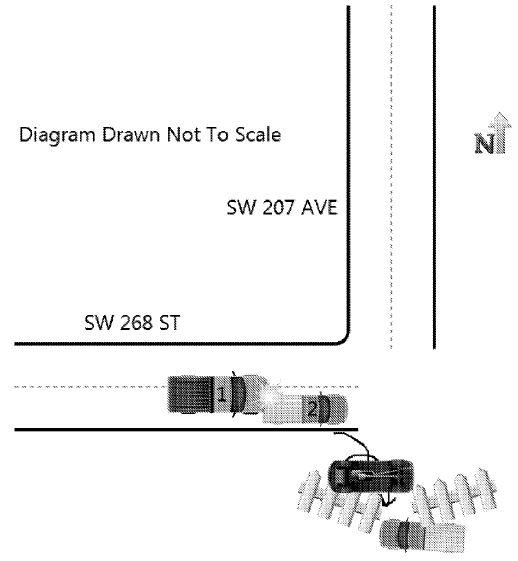 Here is a photo of the intersection:

The truck rolled over multiple times.  My client’s truck was a total loss.

Progressive, as the careless driver’s insurer, paid my client for the value of his truck.  We didn’t take a fee on the property damage part of the case.

Mike’s truck was towed from the scene.

Liability was clear.  There no comparative negligence on my client.  The other driver received a ticket for careless driving.

Mike was wearing his seat belt.  On impact, Mike suffered a head injury from a blow to the head as the vehicle rolled over.

He lost consciousness. He also suffered cuts to his left finger, left shoulder and bruises to his left leg and spine.

Shortly after the accident, I took the photo below.  It shows the bruising to his shoulder. Before his case was ready to be settled, we asked him to take a photo of his finger.  On November 3, 2015, Mike took a photo (below) of his finger. It shows a permanent scar to his finger, from the avulsion injury.  He never regained sensation to the tip of his finger.

Paramedics were called to the scene. When the paramedics arrived, Mike was still nervous and in shock.

His main complaints were pain in his head and left leg. They immobilized Mike on a
backboard.  They applied a C-collar and transported him to Homestead Hospital.

We requested the Miami Dade Fire Rescue report and bill.  We sent it to both Progressive adjusters.

When Mike arrived to the emergency room of Homestead Hospital, the location of injuries were noted to be to his head, upper and mid back and an avulsion to the left 4th finger.

Loss of consciousness was noted.  Mike was put on an IV and given medications for pain.

X-rays of the finger, leg, thoracic spine were ordered to rule out fractures, as well as CT scans of the cervical spine and the brain (to rule our intracranial hemorrhage).

Being a Nuclear chemist, he was concerned about the long term effects of being subjected to radiation from the CT scans.  Mike was released with instructions to keep his wound clean and to return to the hospital if his
symptoms worsened.

He was also told to follow up with a doctor in the next few days. We requested the hospital records and bill.

We sent them to both Progressive adjusters.

Five days after the accident, Mike went to Dr. Austin, from South Florida Spine & Rehab Centers. He was experiencing radiating pain in his neck and mid back.

At the time of his examination his level of pain was noted as a 9 on a scale from 1-10. Bending and twisting his body or turning his head from side to side made the pain worse.

His examination revealed reduced range of motion of the spine, torticollis, tenderness and spasms throughout the spine.

He was advised to use ice and heat at home and to use “proper ergonomics” to help lessen the symptoms. He was also given sample of topical analgesics to apply to the affected areas.

Adjustments and physical therapy were also recommended.  Mike decided to no undergo additional therapy with Dr. Austin because he felt that the initial treatment did not provide much relief, instead he continue to take the pain medications recommended at the hospital.

We requested the record and bill from Dr. Austin.  We sent them to Progressive.

Mike said that he received additional care from another physician, but he does not remember his name and the practice closed.

As a result of the crash he suffered not only physically, but also emotionally. Before the crash he was very active. The injuries affected his ability to enjoy time with his family and doing outdoor activities, like fishing, which he enjoys.

It affected him at work, since some functions required him using his hands, standing or rolling a 300 pound cart.  He felt dizziness upon standing too fast.

He does not know if the headaches will ever go away. He worries about what future health problems may arise as a result of his head injury or from his exposure to radiation from the CT Scans.

He is also left with loss of sensation and a permanent scar on his finger.  This collision was stressful for him and his family.

Policy Limits for Bodily Injury Coverage of the Careless Driver:

We quickly got Progressive to pay its limits of $20,000 to settle the entire case.  Mike is pleased with the result.

I am a Miami car accident lawyer who represents people injured in Homestead and anywhere in Florida.