If you’re in a motorcycle accident and you’re dealing with GEICO, you want to know all that you can.  Here are some settlements and facts that you need to know.

GEICO Pays Motorcycle Rider $100,000 for Herniated Disc and Other Injuries See this settlement where GEICO paid a motorcycle rider $100,000 after a car hit him.  He claimed a herniated disc, meniscus tear & erectile dysfunction (“ED”).

The crash happened in Miami-Dade County.  The actual motorcycle from the accident is above.

I represented the injured biker. 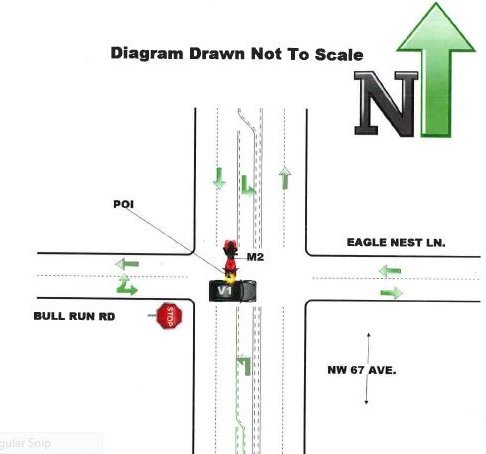 GEICO paid a scooter rider $25,000 after a driver failed to yield the right of way and hit him.  United Auto Insurance Company paid $10,000.

The scooter that he was riding is below. If You Have GEICO Uninsured Motorist Coverage, Will It Cover You in a Motorcycle Accident?

Yes, if you have:

Example of How GEICO UM Insurance Works for Motorcycle Accidents

Brannon had $10,000 in UM insurance on his motorcycle.  An at-fault driver of a car hit and injured Brannan.

Brannan had 3 cars that have each had $100,000 in UM insurance.  Brannon wasn’t entitled to this UM insurance because it wasn’t stacking.  He had non-stacking UM.

Since the UM insurance on those vehicles is non-stacking, Brannon couldn’t use it.  If each car had stacking UM insurance, Brannon would’ve been entitled to up to $300,000 (3 vehicles x $100,000 on each).

Brannon must prove that his case is worth the additional UM insurance.

It caused Donnerstag to collide with Taylor’s vehicle and to be thrown from his motorcycle.

GEICO insured Taylor for $10,000 in bodily injury (“BI”) liability insurance.  Donnerstag had a $500 deductible on his motorcycle.

Has GEICO Been Sued Before for Acting in Bad Faith in a Motorcycle Accident Case?

This isn’t my case.  This was an intersection accident.

Harvey had a $100,000 BI liability insurance policy with GEICO.  GEICO paid the limits within 9 days after the accident.

The motorcycle rider’s estate sued James Harvey, the driver of the vehicle.  The estate sued for negligence.

The estate won at trial and got a judgment of $8.47 Million.  GEICO’s insured, Mr. Harvey, then sued GEICO for acting in bad faith.

A jury found that GEICO acted in bad faith by failing to settle the claim of The Estate of John Potts against GEICO’S insured, James Harvey.

The Harvey case is now on appeal at the Florida Supreme Court.  The attorneys have already done the oral argument.

Has a Court Ever Said That GEICO Can Improve Its Claims Process for Motorcycle Accident Claims?

Yes.  In Harvey, the judge said that GEICO’s claim process was not without fault and could be improved.

Does GEICO Reward Its Adjusters for Paying You Less for Your Auto Accident?

See if GEICO rewards its adjusters for settling for less money in motorcycle accident claims.

Hurt from a Motorcycle or Other Accident in Florida?