On May 2, 2013, my client, a police officer, was involved in a car accident while he was working.

He was traveling northbound on SW 87 Avenue while responding to an emergency call; he had his sirens on in his patrol vehicle.

Another driver was traveling westbound on SW 100 Street.  GEICO insured the other driver.

She turned left onto SW 87 Avenue directly impacting my client’s patrol vehicle (picture is below). The other driver received a ticket for failure to yield the right of way. Liability was clear.

GEICO didn’t blame my client for the accident.  There were only two cars involved in this crash.

They were the car that my client was driving and the other car.  I drew a picture of the accident scene below. 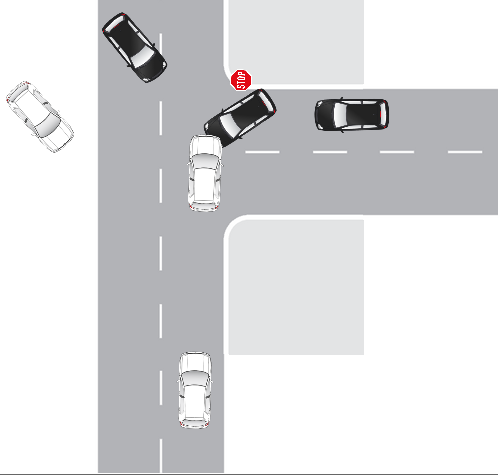 The black car is the car that received the ticket. My client was driving the white car.

The 2 cars to the far left are where the cars involved in the crash ended up after the impact.

At the scene of the accident, my client was transported to Baptist Hospital, where he was seen in the emergency room. He had trauma to his right hand and cuts to his forehead.

X-rays were performed on his right hand. The emergency room doctors diagnosed him with right fifth metacarpal shaft fracture.

While in the emergency room he was referred to Dr. Jorge Orbay-Cerrato, an orthopedic surgeon.

On May 14, 2012 Dr. Jorge Orbay-Cerrato performed surgery (an open reduction and internal fixation) of the right fifth metacarpal on him at Kendall Regional Medical Center.

On May 23, 2012 Dr. Jorge Orbay-Cerrato saw him again. His right hand was placed in a splint and he was referred and went to occupational therapy. On June 21, 2012 he had a 2nd surgery where the hardware from his right hand was removed and continued physical therapy until June 28, 2012.

Dr. Jorge Orbay gave my client a zero percent impairment rating. In Florida, if you are injured while in an automobile, in most (but not all) cases in order to get non-economic damages (e.g. for pain, suffering, etc.) a doctor must say that you have a permanent injury.

I know one defense attorney who is of the opinion that a jury is more likely to believe the workers compensation doctor (if he or she was the client’s treating doctor, and particularly when he or she performs surgery) rather than another doctor who examines the patient (injured person) just a couple of times.

If these doctors are not very conservative with their impairment ratings, the workers compensation insurer will find another doctor to send other workers to.

On 4/24/2013, he treated with Dr. Robert Moya where he described his pain level as 6 out of 10. Dr. Robert Moya is one of the orthopedic doctors that I recommend for people who want a doctor to treat them for a hand injury if they were in an accident where someone else is at fault.

Dr. Robert Moya gave him a permanent impairment rating of 3% and related this injury to this accident. During the examination Dr. Robert Moya noticed and indicated there is deformity visualized on the 5th carpal following the fracture and subsequent surgery and the 5th metacarpal is shorter.

As a result of this accident, for some time my client could not use a firearm, which is a requirement of his occupation. He missed approximately two months of work. He was not paid for 33 1/3% of his wages, which amounts to $3,132.64.

Through negotiation, I was able to get Miami-Dade county to accept $12,500.  My client owned a car in Florida at the time of the crash.  So he was covered under PIP on his personal auto insurance.

After we paid off the workers compensation lien (which was more than $9,750), I was able to get my client’s auto insurer, State Farm, to pay us $9,750, which was the amount of the unused Personal Injury Protection (PIP) coverage.

So my client basically received $90,000 in pain and suffering for his broken wrist.

When I spoke with a State Farm claim’s representative on the phone, they stated that they weren’t aware of any law that said that State Farm had to reimburse my client.

I am happy that State Farm quickly reimbursed my client.  However, after I presented this claim to State Farm, I was a bothered that they either did not know this law or acted like they did not.

I can see how some people or even attorney would have believed State Farm and not tried to get State Farm to repay the client (for the amount of money that was paid by the client from the client’s bodily injury settlement to settle the workers compensation lien.

Not knowing this law would have resulted in recovering $9,750 less.  At the end of the case my client told me that he would have accepted GEICO’s opening offer of $81,000.

He told me that he would not have known that he could or should have negotiated with GEICO.

This assumes that GEICO would have made an opening offer to my client of $81,000. So based on what my client told me, I was able to get my client a total (gross) settlement of about $53,000 than the amount that my client said that he would have accepted had he not hired me.

Now, I want to make it clear that prospective clients may not obtain the same or similar results. Another huge benefit that my client received by hiring me is that he did not have to spend time requesting medical bills, records and other documents. It is important to understand how to get your medical bills paid after a car accident in Florida.

So we did a presuit mediation (which I always encourage) with GEICO and settled for $125,000. GEICO paid for the mediator’s fees, which I appreciate.

I wish GEICO would have offered the $125,000 before mediation.  It would have saved my client and me time.

However, I have to give GEICO some credit for being reasonable with this case.  They suggested pre-suit mediation.  We settled before suing the other driver and car owner.

While filing a lawsuit is sometimes necessary, this was a case where it was not.

Prospective clients often ask me whether they need an attorney. My answer is usually yes. To show you how much work goes into a case:

Geico is one of the largest Florida private passenger auto liability insurers.  The other ones that make up the Top 15 in terms of market share are:

The above is in addition to the fact that:

My client gave me this review:

“Justin cared about me and went over and beyond to make sure I was taken care of. I’m 100% satisfied with everything. Justin will be my first call God forbid something else was to happen to me again. What attorney do you know who will drive to you on a weekend? Justin answered all of my questions and phone calls 24/7.

I wouldn’t choose any other attorney, hands down. Justin, Thank you for everything you have done for me. I truly appreciate all of your had work.”

Prospective clients may not obtain the same or similar results.

I am very appreciative that my client trusted me with his case. I love being able to help people…hence our law firm name JZ helps.

I have settled many Florida injury cases, including car accidents, slip and falls, and cruise ships accidents. I want to represent you if you were injured in an accident in Florida, on a cruise ship or boat. Call me now at (888) 594-3577 to Get a Free Consultation.