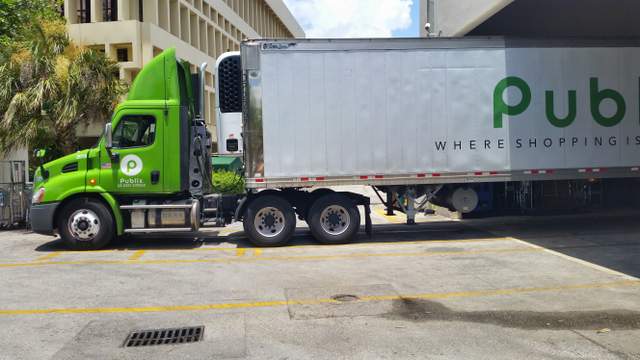 If a Publix truck hits and injures you, then you may be entitled to compensation.  This article focuses on Publix truck accidents in Florida.

Can You Get Pain and Suffering Damages if a Publix Truck Hits You in Florida? A supermarket tractor-trailer driver’s carelessness may cause your injury.  In Florida, in most cases, you will have to show that you have a threshold injury to qualify for pain and suffering.  This usually consists of a permanent injury.

You need a threshold injury because Publix’s truck is required to have Personal Injury Protection (PIP) in Florida.

Pedestrian Hit and Killed by Publix Truck Has Case Dismissed

See why a court dismissed a pedestrian’s case. He was hit and killed by a Publix truck while he was crossing I-75 wearing dark clothing, at 3 a.m.

A Publix truck driver’s negligence may cause your injury while you are a pedestrian in Florida.  If so, you may have a case.

Publix may show that the truck has PIP coverage.  If so, the pedestrian needs a threshold injury to qualify for pain and suffering damages.

This is because Publix will most likely say that its trucks have PIP.  If so, Publix is entitled to the threshold defense.

Non-resident pedestrians are not entitled to the Publix truck’s PIP coverage in a Florida.  The nonresident may still have their own PIP coverage.  Perhaps they rented a vehicle in Florida.  If so, it may provide PIP coverage.

A nonresident does not need a threshold injury to sue for pain, suffering, mental anguish and inconvenience.

How are Publix injury claims different from State Farm, GEICO or Progressive cases?

Publix is not an insurer.  Publix use a third party administrator (TPA) for claims.

The TPA evaluates the case.  Since there is another party involved, it may take longer to get an offer.  This can delay settlement.

In a claim against State Farm or another auto insurer, the adjuster may have authority to settle a case.  On the other hand, a TPA may need to get authority from Publix to settle.

Publix has no bad faith exposure

Publix does not face additional exposure for bad faith claims handling.  State Farm, GEICO and Progressive have a duty to protect their insured.  Publix does not have this duty.

Truck crash claims with auto insurers may result in a quicker settlement.  This may be true if the BI limits are low in a Florida auto accident case.

Auto insurers may want to pay the limits rather than face additional financial exposure.  Publix does not have this concern since they are self-insured (up to a certain amount).

You cannot file a consumer complaint against Publix with the Florida Department of Financial Services.  You can do this against an auto insurer.  If the insurer is acting in bad faith, a consumer complaint may trigger another review of the case.  This may help get the case settled for fair value.

You may be able to file a consumer complaint against Publix’s TPA.  However, this really does not affect Publix.

A Publix truck driver’s negligence may cause your injury in Florida.

Publix may have emergency response teams

Publix may dispatch an emergency response team to the crash scene.  Most auto insurers do not do this.

Publix may have a head start on preserving evidence from the truck wreck scene.  This may give them an advantage.

Can You Get a Settlement if a Florida Publix Truck Driver is Drunk and Causes Your Injury? Maybe.  The Publix’s DUI driver’s carelessness must have caused your injury.  Check out some Florida DUI car and truck accident settlements.

Is a Publix Car or Truck Accident Case Handled Differently than a Slip and Fall Case in Florida?

Yes.  Florida car accident claims have over 15 issues that are not present in slip and fall case against a Florida Publix.  The injured person needs to be ready to deal with these factors from day one.

There may be a written safety policy that includes directions on the safe operation of vehicles.  Publix may be liable if the driver’s carelessness caused someone’s injury and the Publix driver violated a policy.

A Publix truck may cross state lines into Florida during normal operations.  If so, Publix may have responsibilities that they need to meet under the Federal Motor Carrier Safety Regulations.

If a Publix truck is making a local delivery in Florida, are customers promised delivery within an exact time?

If so, are Publix drivers told that safe driving is more important over meeting the time deadline?  If not, this may help the person who is hurt if a Publix’s truck driver’s negligence caused the accident.

Do Publix employees use their own vehicles for work purposes?  If so, Publix may be on the hook for an accident.

Another issue is whether Publix allows employees to use company owned vehicles for personal use.  This would primarily apply to district or regional managers.

If Publix allows this, are there limitations in writing as to who may drive the vehicle and how far it may be driven?

In Florida, is Publix Liable for Its Driver’s Carelessness Because It Owns the Truck or Car?

Yes. Florida laws make a vehicle owner responsible for damages that its driver causes.  This is true whether a Publix employee is driving a car or truck.  There is no limit on Publix’s liability.

This is true even if Publix did nothing wrong.  But the driver must have been careless.

A Publix truck driver may crash into the rear of your car in Florida.  You may be hurt.  This case is not necessarily a slam dunk.

You should immediately send a letter to Publix Supermarkets requesting that they preserve evidence.  This evidence may disappear as time goes by.

Publix truck drivers are highly regulated.  Publix may be negligent for allowing a truck driver to drive an excessive amount of hours per Federal regulations.  The Publix truck should have an event data recorder.

It may reveal important facts that can make or break your case.  You may need to hire an expert to download the data from the data recorder.

The same is true if a Publix employee was driving a car, and hit you while he or she was working.  Publix district managers drive cars throughout Florida.

Who pays your medical bills if a Publix truck driver’s carelessness caused your injury in Florida? If a Publix truck driver’s carelessness caused your injury in Florida, find out who pays your medical bills.

Will Medicare cover medical bills if a Publix truck driver’s negligence caused your injury while you were on a motorcycle in Florida? Generally yes.  Find out more about whether Medicare will pay your bills if a Publix truck hits you while you are on a motorcycle.

Who Pays the Medical Bills if a Publix Truck Hits a Florida Bicyclist? A Publix Supermarket driver’s negligence may cause injury to a Florida bicyclist.  If so, PIP may pay some of the medical bills.  The order of PIP coverage would be:

Generally speaking, only one of the above PIP coverages would apply.  If the bicyclist was not a Florida resident, and does not have PIP, then Publix would not provide PIP coverage.

Is Handling a Car or Truck Crash Case Against Publix Supermarkets Difficult and/or Time Consuming?

Expect the case to be time-consuming if you want to handle it yourself.  Whether the case is difficult depends upon the particular facts involved.  Take a look at this car accidents article to see how much work goes into a typical Florida car crash injury case.

This is of course if you want to handle it properly.  It is most likely much more than you think.

If a Publix truck hits you in Florida, and you have Uninsured Motorist (UM) coverage, you should immediately make a UM claim with your insurer.

Argue to your UM insurer that under Florida law, since Publix is self-insured, its truck is “uninsured”. Therefore, your UM claim starts from dollar one.

Last time I checked or heard, Publix is self-insured for the first 1 million dollars for a liability claim.

I have been successful in this argument against a large trucking company who had a self-retention policy of $250,000.

If the UM insurer denies your claim, you should file a civil remedy notice of insurer violation.  Be sure to send the notice to your UM insurer. It has 60 days to respond to your notice. This will put pressure on the UM insurer to pay.

A car crashed through the front doors of a Publix in Belle Terre Parkway in Palm Coast, Florida.  It occurred on April 20, 2013.  A picture can be seen below. The Daytona Beach News-Journal reported that two of the injured victims reached a confidential settlement with Publix.  I assume that their theory of negligence was that Publix should have better protected the front of the store from vehicles entering the store.

Per ABC Action News, on October 23, 2014, a plant city man was in critical condition at Tampa General Hospital following a crash on Interstate 4.

The Publix driver was not hurt.

According to the Ledger, a paralyzed truck driver sued Publix.  The Ledger reported that the former truck driver was seeking $10 million from a loading dock accident that paralyzed him.

The former truck driver, Pablo Gonzalez, was paralyzed from the neck down.  Pablo claimed in a lawsuit filed in July 2008 that Publix was negligent in the way in which it treated independent truck drivers.

Gonzalez was allegedly delivering eggs to a Palm Beach Gardens store in September 2007.  He claimed that the lift, to unload his truck, lacked railings.

A few months prior to the accident, Gonzales was hurt jumping off the lift.  However, he claimed that he only injured his knee in that accident.

He claimed that he tried to sit down and slide off the platform on this occurrence.  He alleged that he lost his balance and landed head first.

He claimed that Publix supermarkets gave safety devices only for Publix trucks, and not independent truck drivers.

His attorney said that workers compensation had paid a huge amount of benefits.

In Florida personal injury cases, workers compensation is entitled to get paid back for some of the benefits that it pays.

Did a Publix truck driver’s carelessness cause your injury in Florida?  Were you hurt in another type of accident?