The date of this crash was in February 2014.  At the time, my client was employed as a sales representative.

How the Accident Happened

She was driving a car near Orlando, in Orange County, Florida.  She lives in Margate, Florida.

Another driver crashed into the back of our client’s car.  The diagram of the accident, from the actual crash report, is below:

My client was driving her car.  She was stopped in traffic.  The car behind her failed to stop.

The front of the Jeep collided with my client’s car.  A picture of my client’s car is at the top of this page. The picture shows the damage to the rear of her car.

As you can see, it was a hard impact.  It resulted in $7,232.94 of property damage.  She claimed that her knee hit the dashboard.

The driver who caused the crash told the Florida State Trooper that her brakes didn’t work.  She told him that she applied the brakes and they did not slow her Jeep.

She told the officer that she pumped the brakes and they still didn’t slow her vehicle.  The office checked the master cylinder, which showed a max level of brake fluid.

The trooper also pushed on the brake fluid and brake pedal.  The brake pedal felt firm and had good pressure.

Trooper Lists Her Injury as “None”

At the accident scene, she had pain on the right side of her body, right knee, pain in her neck and hip and lower back.

She wasn’t transported to the hospital

An ambulance did not take her to the hospital.  Paramedics advised her to seek medical care as soon as she could.

She waited 4 days to get medical treatment

Four days after the accident, she went to her primary doctor.  She had x-rays to her ankle, her right foot, her cervical spine and hip to see if she had any fractures.

She did not have x-rays of her knee at that time.  Fourteen days after that visit, she had a follow up evaluation due to constant pain since the crash.

She was diagnosed with sprain of her cervical (neck) area, knee, ankle, hip, and shoulder pain, as a result of the collision.

The next day, she had x-rays of her knee and shoulder.  Three days later, she went to the doctor.

He noted that she had pain when testing her range of motion (how far her knee could move).

Her doctor referred her to an orthopedic evaluation, which she had five days later.

The orthopedic doctor, Dr. Gupta, examined her.  He noted that she had knee pain, chondromalacia, indicative of a possible torn medial meniscus. 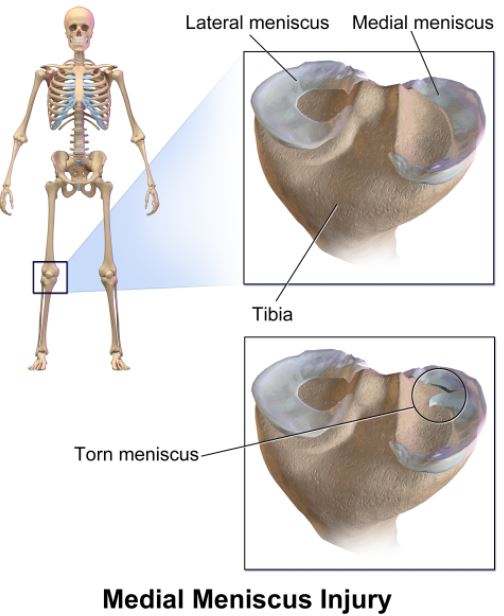 She was also diagnosed with acute lumbar strain.  He recommended therapy to the affected areas, including the use of a TENS unit.

Dr. Gupta also ordered an MRI of her knee to see if she had a tear.  She had the MRI.  Three weeks later, she returned for her follow up evaluation and review of her MRI.

Her MRI showed that she had a tear of the posterior horn of the medial meniscus with knee joint effusion and signs of chondromalacia patellae.  We sent the MRI report and bill to the USAA.

USAA was the bodily injury (BI) liability insurer for the careless driver.  Dr. Gupta indicated that Maria* had been dealing with multiple issues since the collision, but her right knee and back were her main complaints.

He examined her spine for muscle spasms and tenderness to palpation. Dr. Gupta noted that the pain in her spine had “been getting worse since its onset,” that is, since the date of the incident.

Her knee pain was rated as a 4-6 on a scale from 1-10, with symptoms worsening with increased activity and worse when using stairs. Tenderness was present at the medial joint line (posterior third and mid third).

She considered the risks of surgery, the expense and the time she would have to take off work (for surgery and the necessary therapy). She initially decided to try to manage her pain at home. However, her symptoms did not improve.

I spoke with Dr. Gupta’s staff, who said that Dr. Gupta could not say one way or the other whether the tear was caused by the crash.  They said this because Dr. Gupta only saw her twice.

I do not know whether the doctor would have said that the car wreck aggravated a pre-existing condition.

Tip:  In order to get compensation for your injury in Florida, the doctor needs to state that the crash caused or aggravated a pre-existing injury.

Maria waits over 5 months to see another orthopedic doctor

Given the severity of her symptoms, Maria decided to seek a second opinion.  She sought care with Dr. Simon from National Orthopedics and Neurosurgery.

He noted that she had continued pain on her knee caused by the crash. Her level of pain was noted as a 7-8 on a
scale from 1-10.

She described the pain in her knee as intermittent, “dull and achy.”  Intermittent means “comes and goes.”

The doctor examined her knee and noted that she had restricted range of motion and tenderness.

The exam of her spine showed that she had pain in her lumbar spine, which radiated into her right lower extremity laterally from the thigh to the knee.

The doctor discussed the risks of the surgery with her again, including “failure to relieve pain, loss of function, damage to nerves and vessels, deformity and scarring, possible infections, prolonged hospitalizations, etc.”

Dr. Simon explained that during surgery two or three incisions to the knee would be made and a camera would be inserted to allow him to correct abnormalities found.

He advised her that there may be some abnormalities he would not be able to correct and/or would have to be treated with another surgery.

Dr. Simon warned her that he could not determine how long she would be in crutches or out of work. Neither could he guarantee how much pain relief, if any, would be obtained from the surgery.

We sent Dr. Simon’s records to USAA with our demand letter.

Maria’s total medical billed charges were $4,763.00.  At the time of the crash, State Farm insured her car. They paid part of her medical bills.  In Florida, your own car insurance usually pays most of your medical bills.

State Farm PIP paid her medical providers $1,571.03. According to Dr. Simon’s office, their bill was still pending payment from PIP.

In almost every case, a health insurer has a right of subrogation.

I argued that Maria has a permanent injury because two surgeons, Dr. Gupta and Dr. Simon, recommended surgery.

As explained in Dr. Simon’s report, surgery will require hospitalization and additional physical therapy, resulting in additional expenses and lost wages for her.

Her life expectancy is approximately 32 years.

Pain, Suffering and Other Damages

Maria has suffered from ongoing pain, especially on her knee, since the other driver crashed into the back of her vehicle. She experiences discomfort when walking or climbing stairs.

She has trouble wearing heels, or working out. Her ability to enjoy outdoor activities and life in general has been affected due to this incident.

My client was worried about the risks of surgery, but feared the condition of her knee will continue to deteriorate without it.

She wanted to have the surgery, but to do so would mean taking time off from work and incurring additional out of pocket expenses.

She says that this event has not only affected her physically, but will also continue to affect her emotionally and financially.

USAA insured the at fault driver. This settlement is before deduction for attorney’s fees and costs. Most cases result in a lower recovery. It should not be assumed that your case will have as beneficial a result.