You are here: Home / Auto Accident Claims / Uber Hit a Pedestrian. What Compensation Can the Pedestrian Get? If an Uber car hits a pedestrian, the pedestrian may be entitled to compensation.

I’ve written about cases for pedestrians who are hit by cars, and Uber car accidents.  However, this article specifically applies to a pedestrian who is hit by an Uber driver.

Ubers that are in a car accident are covered by certain insurance limits that don’t apply to typical car accidents.  In addition, the type of injury that you may need in order to get compensation for pain and suffering from a Uber accident may also be different.

This article also applies to pedestrians who are hit by a Lyft car.

Does Uber have Personal Injury Protection (PIP) Insurance that Will Pay the Pedestrian?

It depends, in part, on the date of the crash, which I discuss below.

I’ve written about whether Ubers carry PIP insurance.  Here, I’ll focus on PIP for pedestrians hit by an Uber.

Accidents Before July 1, 2017 – Can Pedestrian Hit By an Uber Get PIP from Uber?

Accidents On or After July 1, 2017 – Can Pedestrian Hit By an Uber Get PIP from Uber?

If the pedestrian doesn’t own a car, or live with a resident relative who owns a car, the pedestrian gets PIP from Uber if the Uber driver had the app on, but wasn’t engaged in a ride.  Florida Statute 627.748(7)(b)1.b.

This assumes that the pedestrian was a Florida resident.  (The pedestrian would need a threshold injury to get compensation for pain and suffering in his personal injury claim).

If the Uber was engaged in a ride, then the pedestrian can’t get PIP from Uber.

Can a Pedestrian Who Is Hit By an Uber Make a Personal Injury Claim? 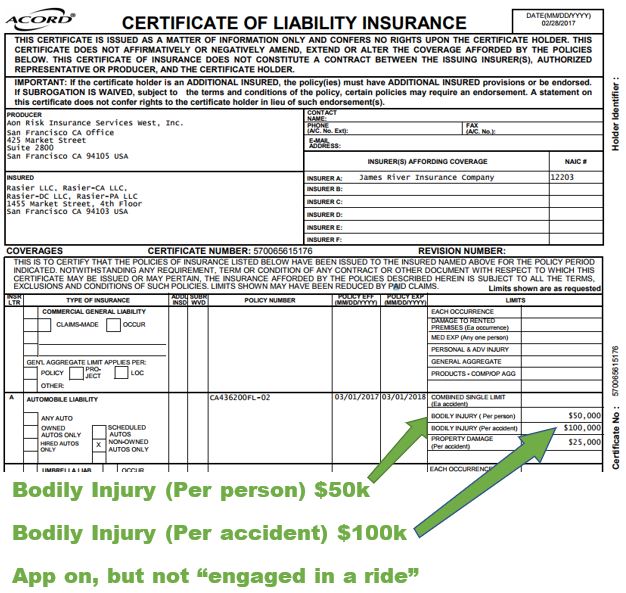 If the Uber was engaged in a ride, the Uber’s liability insurance limit for death, injury and property damage is $1 million. Florida Statute 627.748(7)(c)1.a.   Uber’s certificate of insurance shows this limit. This isn’t my case.  ABC News reported that the family of a 6-year-old girl who was struck and killed by an Uber driver in 2013 settled a lawsuit against Uber.  The girl was Sofia Liu.

As is typical, the settlement amount wasn’t disclosed in court documents.  This is a sad case.

The family claimed that the Uber driver was using the Uber app and had been looking for rides when he hit Sofia as she crossed the street with her mother and brother in a crosswalk.

Let’s assume that this crash happened in Florida.  Uber’s insurance would’ve paid $100,000 for the entire accident.  No single person would’ve received more than $50,000 from Uber’s insurer.

This is because the driver allegedly had the app on, but wasn’t engaged in a ride.

Since the girl was in the crosswalk, no fault likely was assigned to her or her mother. The value of the wrongful death case is easily worth more than $50,000.  In Florida, Uber’s insurer would probably send an adjuster to hand deliver a check to the girl’s mother.

The mother’s UIM insurance would’ve applied even though they weren’t in their car when the collision happened.

Hurt from an Uber Car Accident in Florida, or Another Type of Accident?